The awards ceremony, held in conjunction with the upcoming Realscreen West conference and recognizing the best in reality, doc and factual entertainment from across the globe, will take place in Santa Monica, California on June 4. 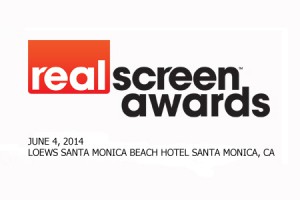 The first round of judging has concluded for the upcoming 2014 Realscreen Awards, arranged by StreamDaily‘s sibling publication realscreen. The shortlisted programs will advance to the second and final round of judging. Red Bull Media House, Discovery Channel, and AOL On are among those who have shows nominated in the digital categories.

The awards, which recognize the best in reality, documentary and factual entertainment programming from around the world, will be presented during a ceremony held at the Loews Santa Monica Beach Hotel in California on June 4, in conjunction with the forthcoming Realscreen West conference, which takes place June 4 and 5. For more information, visit Awards.realscreen.com.

The shortlisted programs in the digital categories are: