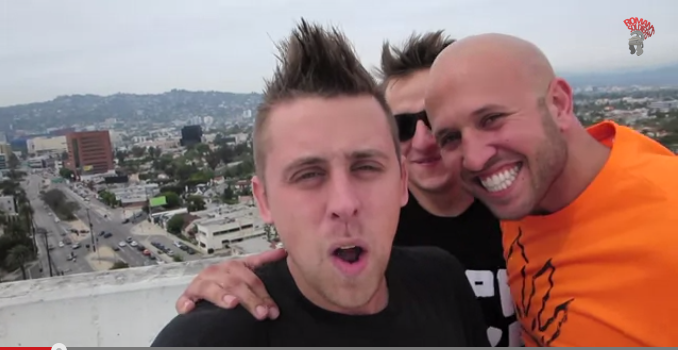 Laugh together, pee your pants together: More on CDS’ theatrical release

Collective Digital Studio is taking on a big undertaking and producing a film for theatrical release with YouTube pranksters. Gary Binkow, chief creative officer tells StreamDaily why the project is going to deliver in a big way.

Collective Digital Studio (CDS) has launched successful web series, TV shows and movies, and now the company is looking for a hit at the box office as well.

“There’s something about the communal nature of laughing, crying and peeing your pants together in a dark theater that makes it a unique experience,” says Gary Binkow, chief creative officer at CDS, about the decision to distribute the company’s latest movie theatrically.

Starring YouTubers Roman Atwood, Vitaly Zdorovetskiy (VitalyzdTV), and Dennis Roady (pictured from left in screengrab), CDS is funding and producing the project, tentatively called Natural Born Pranksters. The brainchild of John Fitzpatrick, who is a producer on the movie, and directed by Atwood, this is a big undertaking that will require a large support team, scheduling, pre-planning, and eventually, a distributor, Binkow says.

But the next-gen media company is confident that the comedians have a large fanbase that wants to see them in theaters, and that the project will deliver “on a big scale” just as Video Game High School, Annoying Orange, and Fred: The Movie (based on Fred Figglehorn, character developed by Lucas Cruikshank) have.

Zdorovetskiy, Atwood and Roady have more than 10 million subscribers between them. They’ve all found success playing candid-camera jokes on family, friends, and strangers. In a recent prank on his mom, for example, Zdorovetskiy made her believe he had fathered a child, going so far as to present her with fake paternity papers. (As expected, there’s a lot of yelling in Russian when she finds out the truth.)

“There are a number of YouTube pranksters, but these guys continuously take it to another level,” adds Binkow.

CDS is looking for a distribution partner for the upcoming film.

“I’ve found that being independent offers the best chance to make the film the way the guys want to make it, with little third-party interference. Once we finish the film, we’ll screen for all the distributors and decide if we want to go with them or keep it independent,” Binkow says.