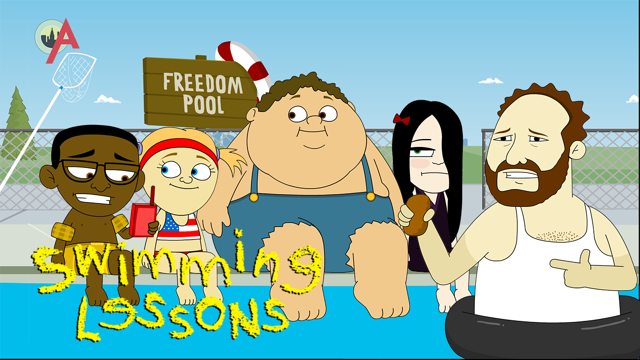 Stroke of genius! How a pool job inspired new Above Average series

Swimming Lessons debuts today on the comedy network, and co-creators Daniel and Keith Shepard talk about their summer job that inspired the series.

As teenagers, brothers Daniel and Keith Shepard worked at a swimming pool in their U.S. Midwest hometown, teaching swimming lessons to kids. After graduating college, they would return to this once-laid-back summer job, but this time faced the fear they would never get real work and move out of Independence, Kansas.

The experience sparked an idea for a web series and on Wednesday the story of these characters came to life on the Above Average comedy network. New episodes of Swimming Lessons, an animated show about a swim instructor and his seven-year-old students, will air weekly this month.

The central character is a down-and-out man whose wife has left him and the only work he can get is teaching at a small-town pool. “We thought, ‘wouldn’t it be funny if we had a character like Louis C.K. teaching swimming lessons to kids?” says Shepard, who with his brother co-produced the series through their company Woodland View Productions.

But Shepard admits he also partly based the instructor’s world view on the dejected feelings he experienced when he had to move back home and work at the pool after college; waking up at the crack of dawn to teach swimming lessons to kids, worried about future job prospects.

The child characters in Swimming Lessons, meanwhile, are references to inflated Midwest personalities — “My name’s Dear Baby Jesus!” screams one of the girls, wearing a star-spangled banner bathing suit.

Earlier this year, the three-episode show aimed at adults age 18 to 35 was completed in about six weeks, with a budget of about $6,000. Animation is a format that works well for Woodland View, Shepard says, as the producers don’t live in the same city: Daniel is based in New York where he works for TV series Inside the Actors Studio, while Keith lives in Missouri working for a farm-equipment company.

“We really think we found our niche,” says Shepard. “I’ve done live-action web series before and it took me so long to do, and it was a lot of money for locations and equipment. And with animation, it’s possible to stay just a really small, tight-knit group.”

Above Average, which is part of the Broadway Video Entertainment family, usually accepts pitches from creators within their network, but Shepard previously had a “handshake meeting” with someone from the MCN about their animated series, Chicks on a Bench, which ended up getting sold to MTV.

Shepard describes Above Average as an ideal partner for the producers, as they have a hands-off approach that gave them enough creative freedom while also providing advice and experience. For instance, Above Average producer Brendan McMorrow who worked on Swimming Lessons would suggest coloring the kids’ eyes for example, or animating moving clouds in the background — details they felt made the show better.

For now, the Shepards aren’t expecting to make money on their passion projects, seeing the web productions more as a “long game” — starting on the web, building an audience, eventually moving to a half-hour show on television. “I think that’s everybody’s goal,” he says.