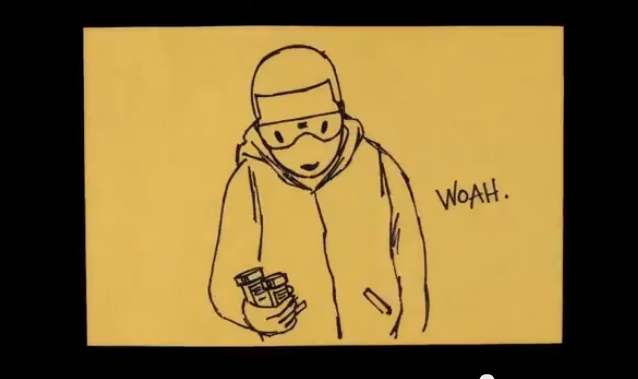 With his latest collaborative animated short, director/producer Jeff Chiba Stearns is looking to build on the viral success of his original animated film, Yellow Sticky Notes.

Finding a home for shorts is never easy, but animator Jeff Chiba Stearns is hoping new avenues like YouTube’s partner program will be fertile ground for his one-of-a-kind film.

The Yellow Sticky Notes/Canadian Anijam project, a collaboration between 15 independent Canadian animators, debuted Wednesday on a variety of online platforms, including YouTube, Vimeo and Film Annex.

The animators each created individual short segments using sticky notes and a black pen. The individual segments were linked together to make the longer, eight-minute film.

The project is a follow-up to Chiba Stearns’s Yellow Sticky Notes, a short in the same style that racked up nearly two million views after its original YouTube release in 2007.

“The best thing I think I ever did in my entire life was putting it on YouTube because of the exposure that it got,” Chiba Stearns said, adding that he hopes the online distribution model for his latest project helps it generate similar reach.

“The real goal of this was to have it be seen,” said Chiba Stearns of Yellow Sticky Notes/Canadian Anijam.

Traditional distributors were taking a pass on the project, Chiba Stearns noted, which he partly attributed to the assumption the film would end up online elsewhere. The project was funded by BravoFact, which meant the film was always set to appear on the organization’s website, which is not geo-blocked, Chiba Stearns said.

“In that respect as well, it made it an easier decision to put it online, obviously,” Chiba Stearns said.

Chiba Stearns is a YouTube partner, meaning he receives some ad share revenue for the videos that are viewed on his YouTube channel, an agreement that has continued since the original Yellow Sticky Notes was posted on YouTube.

“We’re excited that we are able to launch online, and I’m excited to see what kind of attention that’s going to bring, as well as what kind of revenues it might generate now,” Chiba Sterns said.