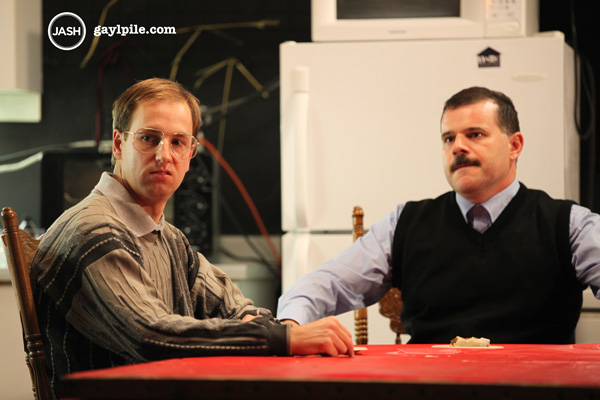 From the creators of IFC series Cock'd Gunns, this strange Canadian comedy series has found a home on the YouTube comedy network that's headed by Sarah Silverman, Michael Cera, and Reggie Watts.

A trailer for The Amazing Gayl Pile reveals it’s going to be one strange comedy; the tone shifting from quirky to creepy. In one scene, actor Morgan Waters portrays a shopping channel host with a deadpan earnestness that’s almost reminiscent of Napoleon Dynamite. But in another, he’s getting a box-wine shower from two guys as loud, garbled sounds play in the background (NSFW!).

Aware that their web series is a bit zany, Waters and co-creator Brooks Gray thought The Amazing Gayl Pile would fit well on JASH, a YouTube comedy channel headed by Sarah Silverman, Michael Cera, and Reggie Watts that’s known for its eccentric programming. After being introduced to JASH co-founder Daniel Kellison and sending him a teaser with some rough cuts of episodes, they were able to arrange a non-exclusive rev-share agreement with the network, announced last week.

The 10-part Canadian series, produced by Toronto-based LaRue Entertainment with the participation of the Independent Production Fund (IPF), will roll out next month in batches of three episodes per week, until the finale, which will air on its own. The project had a budget of about $200,000, financed by the IPF, LaRue, and the Ontario Interactive Digital Media Tax Credit.

“This show is brilliant, weird and funny in that special way only Canadians seem to know how to make,” says Kellison (The Man Show, Jimmy Kimmel Live) in a statement.

Targeting an 18- to 40-year-old demo, The Amazing Gayl Pile is the first follow-up collab from Waters and Gray since the IFC rockumentary series Cock’d Gunns, which won Gemini awards for best writing and best ensemble cast.

“The world is long overdue for an exposé of the rampant sex, violence and spiritual corruption that goes on behind the scenes in the world of home shopping,” says Gray, about the show.