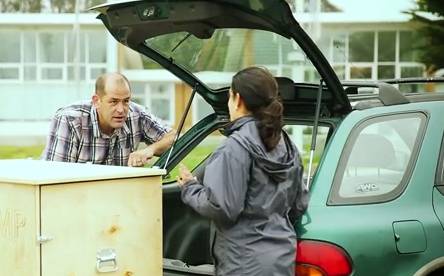 The car sponsors are playing active roles in two new online shows - a different approach than some of the more subtle integrations seen in other auto-branded series.

What is it about cars and web series?

“With a digital series you can target specific communities, offer the opportunity to engage with the content and help the brand become an active participant in the ongoing conversation,” says Nicole Carrico, VP of content for Discovery Communications and head of Studio R+D, in an email.  “A car is a very easy product to integrate into a show. It can be a location, a prop, a cast member, a set, a means to an end, or, like with Second Chance Subaru, an active participant in the story.”

“The integration is consistent throughout, giving Subaru prominent placement, but it’s not the point of the series,” Carrico says.

The show – which can be found on Revision3.com and on YouTube – follows San Francisco Bay Area-based tech/DIY expert Patrick Norton (pictured) as he searches out the owners of high-mileage Subarus and gives their vehicles a custom modification that enables them to be productive and give back to the community in their post-warranty golden years. Owners benefiting from Norton’s handiwork includes a man who transports large adaptive bicycles for children with physical disabilities as well as a woman who mentors youth on camping trips. Subaru has worked with other online-video platforms on branded content initiatives in the past, including IFC’s Tailgate With Portlandia, a spot with David Hasselhoff on Funny or Die.

At first glance, Chevy appears to be taking a more indirect approach with La Cueva de la Fiera, which takes a behind-the-scenes look at Mexican professional soccer’s Club Leon. But the show has prominent product integrations. A Chevy Silverado is driven by Club Leon captain Rafael “Rafa” Marquez throughout its 10-episode run, and in this week’s installment, he gives a surprise soccer clinic to educate young fans and presents them with complimentary Chevrolet-branded One World Futbol soccer balls.

That’s more overt product integration viewers are exposed to than in Jerry Seinfeld’s Crackle series Comedians in Cars Getting Coffee, which debuted its third season in January. While it’s sponsored by Acura, classic car-lover Seinfeld drives his guest around in anything but. Instead, he gets behind the wheels of vintage cars, from a 1969 Pontiac GTO muscle car for Howard Stern to a 4-cylinder 1967 Volvo 1800S for Tina Fey.

However, at one point in the Fey episode, Seinfeld pulls up alongside an Acura SUV and shouts, “Excuse me, is this a product placement?”

“It sure is,” a voice responds.