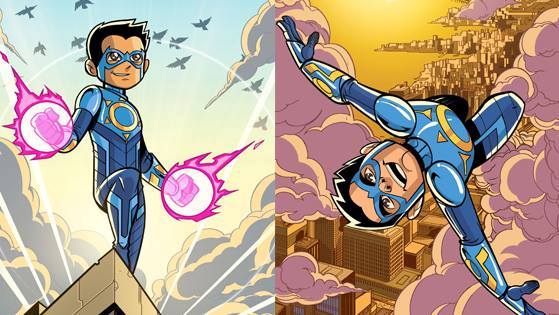 Chakra: The Invincible, which centers around a character created by the legendary Stan Lee (co-creator of Spider-Man, X-Men, Fantastic Four) is about a young boy living in Mumbai whose technology suit activates mystical chakras (spiritual powers) inside him, giving him superpowers to fight city villains. The series is co-produced by Graphic India, a comic book and animation company that focuses on developing stories for digital platforms, and Lee’s POW! Entertainment.

Last November, Turner Broadcasting’s Cartoon Network India picked up the series for television. But through Rovio’s ToonsTV the animated shorts are now available internationally — the first time that an original character from the Indian market has been featured on a global scale, says Sharad Devarajan, co-Founder and CEO of Graphic India.

“Seeing Chakra launch on Rovio is the culmination of a lifelong dream to help spark a new superhero wave from India. In the same way the West has created superheroes or Japan created anime, India has the potential to become one of the biggest creative exporters in the years ahead,” Devarajan tells StreamDaily.

Rovio, the media company behind the Angry Birds franchise that includes mobile games, animated series, and an upcoming movie, is distributing the series on the Angry Birds game apps and Toons.tv, which is also available on Roku boxes and Samsung smart TVs. The ad-supported digital VOD network recently surpassed two billion views, according to a company statement. After launching Angry Birds Toons series on Toons.tv last year, the video distribution platform announced in September it would start carrying third-party content.

Devarajan says Rovio was the right partner for the digital distribution of Chakra: The Invincible because of their focused reach and scale. The parties plan to launch a social media campaign via Facebook where fans get to influence the outcome of one of the episodes.

“Angry Birds? More like Angry Stan!” says Lee in a YouTube video promoting the digital launch. “Look here Rovio, if you’re gonna make a game that I can’t beat, the least you can do is feature some of my unbeatable characters on your app,” he says.

Graphic India, which is owned by Liquid Comics and CA Media LP, the Asian investment arm of The Chernin Group, is also releasing comic books, games, toys and merchandise based on the superhero.