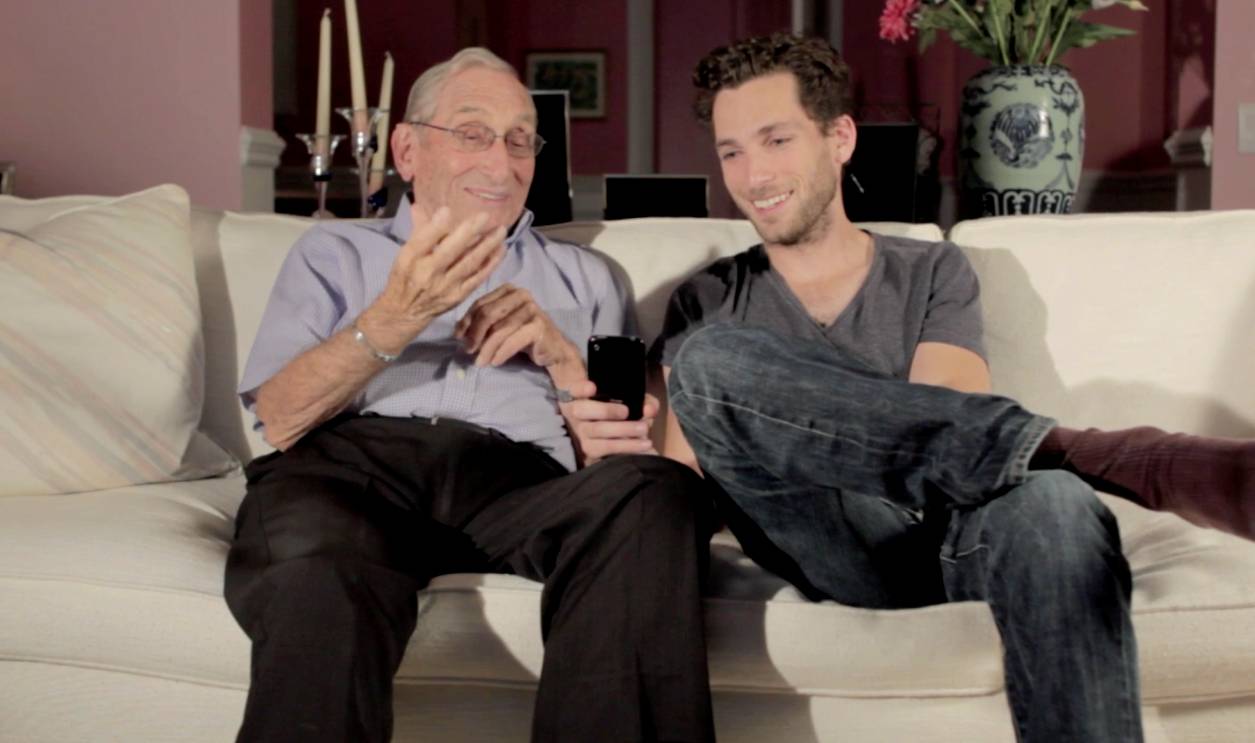 Thirty-year-old Ethan Cole schools his 89-year-old grandfather about sexting, twerking, cockblocking, swinging and other edgy pastimes in his new Funny or Die series Explaining Things to My Grandfather, debuting Wednesday.

Most people would probably rather subsist on a diet of Ensure and Metamucil for a month than discuss things like sexting and twerking with their elderly grandparents – which is precisely why it proves to be such fertile ground for comedy in Ethan Cole’s new web show,  Explaining Things to My Grandfather, which debuts Tuesday on Funny or Die.

The concept for the show was hatched at a family dinner, when Cole’s 89-year-old grandfather Joe asked him about the matchmaking app Tinder he was using on his smartphone.

“I tried to explain it to him, and the idea clicked that this would be something funny and interesting,” says Cole, 30.

In the premiere episode, Cole tells Joe about cockblocking (i.e. spoiling a guy’s attempt to pick up a girl). His grandmother gets into the action, too, cold-calling Cole’s friends and scolding them for cockblocking her grandson.

Future instalments will cover such subjects as wingman-ing, swinging, Burning Man and the aforementioned sexting and twerking.

Cole’s grandparents were probably more shocked by his career change-up than anything they learn on the show. He earned a masters in international relations from Cambridge University in England, but he eschewed a career in diplomacy to pursue his passion for entertainment. After a stint as a copywriter at DDB Canada in Toronto, he and his friend Laurence Mandel Payne sold a show to Canadian sports channel The Score called The Project, in which they tracked down retired athletes and did wacky things with them — from having Ben Johnson and Carl Lewis re-enact the 100-meter dash from the 1988 Summer Olympics in Seoul, South Korea, to soliciting life advice from pro wrestler The Ultimate Warrior (real name: James Brian Hellwig).

The show was cancelled before their biggest stunt could air: flying with baseball slugger Jose Canseco over Dodger Stadium in a plane pulling a banner with an apology to his former teammate Mark McGwire (now the hitting coach for the Los Angeles Dodgers) for ratting McGwire out for his steroids use.

When the rights to the unaired footage reverted back to them, Cole pitched it to Funny or Die, and conversations with Funny or Die president of production Mike Farah and its director of digital programming, Darryl Gudmundson, led to a deal for Explaining Things to My Grandfather.

Shot with a crew of one (director Josh Shultz) on a Canon 5D DSLR camera at his grandparents’ condo in a Toronto suburb, the 10 episodes cost virtually nothing to produce, which is fortunate because they’re not getting paid this time out.

“For this particular project, it’s just about exposure,” Cole explains. “They’re going to be putting it on the front page. If it’s popular, then I think we’ll have those sort of [money] conversations.”

Cole, who says he just completed his first feature film script, says he wouldn’t mind moving to Los Angeles to pursue better  show-biz opportunities. In the meantime, he remains in Toronto, supporting himself with freelance work as an advertising copywriter.

It remains to be seen whether Explaining Things to My Grandfather will find its audience on Funny or Die, but it’s already a hit with Cole’s family. Most of them, anyway.

“My grandfather thinks it’s terrible,” Cole admits. “But he keeps doing it just because he knows I enjoy it.”

Ethan Cole, Explaining Things to My Grandfather, Funny or Die, Mike Farah, The Project, The Score