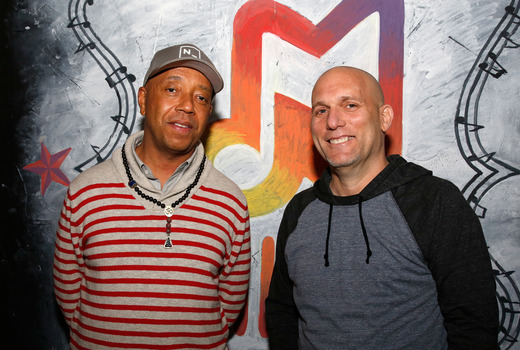 The tech giant and multi-media moguls Russell Simmons and Steve Rifkind have teamed up to create ADD52, where emerging artists can upload their music and videos and promote them across social media.

With social media marketing so central to success in today’s music industry, it makes sense that it’s at the core of ADD52, a new online platform for emerging artists launched this week by Russell Simmons and Steve Rifkind (pictured L-R), co-founders of All Def Digital (ADD) and All Def Music, along with Samsung Telecommunications America and Narrative, a brand marketing firm headed by Simmons and Tricia Clarke-Stone.

“ADD52 is the future of A&R,” Rifkind says in an email to StreamDaily.

Artists are being invited to upload their songs and videos to ADD52.com, then use tools on the site to promote their work on ADD52 and across social media. The best tracks will be funneled into Samsung’s radio streaming product, Milk Music, on a dedicated ADD52 channel. From those top tracks, a panel of judges will select one track per week (52 tracks total), which will then be available for purchase within the iTunes store.

Artists that are selected as a single of the week will have the opportunity to take advantage of additional perks, including production budgets to create their own music videos and remixes, access to world-class studios and mentoring from industry legends. Each artist released by ADD52 will be signed to All Def Music and supported by Universal Music Group. ‎

ADD52 will expand into a content ecosystem that includes audio, music videos, profiles, live performances, collaborations with established stars, and a slate of artist-focused video content that will live on ADD’s growing YouTube channel.

Could this to be a game-changer for the music industry like MTV was in early ’80s?

“ADD52 definitely has potential to be a game-changer but I wouldn’t compare our platform to anything that’s come before it,” Rifkind says in the email.

Rifkind won’t say whether ADD52 is being monetized via advertising on its site or its YouTube network or whether artists will be given a portion of the ad revenue.

“The ADD52 platform is a true artist discovery platform,” Rifkind says. “‎At this point, the focus is on finding the next big thing in music and not monetization of the platform itself.”