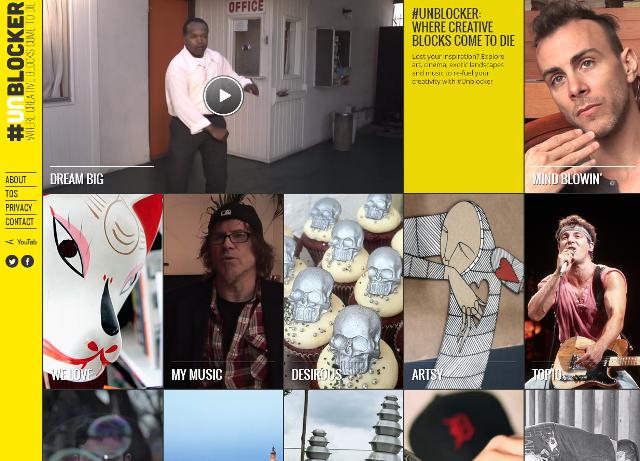 Serving up inspiration with #Unblocker

The new web portal from Electric Sheep and music site YouTab curates an off-the-wall selection of video clips designed to inspire musicians and other artists.

The new web portal #Unblocker was created to serve as tool for musicians and other artists who have hit a creative wall, but it could also be of interest to video producers who have quirky content to license.

Launched two weeks ago, #Unblocker is the result of a partnership between media company Electric Sheep and YouTab, a site that enables users to search for song titles and play the corresponding YouTube music videos alongside a scrolling screen with the lyrics and chord changes.

A link to #Unblocker appears on the YouTab homepage. Once clicked, users are taken to a page of video panels featuring profiles of an eclectic array of artists (Barcelona visual arts studio, a paper sculptor named Li Hongbo… Scarlett Johansson) and video countdowns of things like the top ten sexiest music clips and the best Bruce Springsteen songs.

“We’re trying to source the best video content out there that is compelling, creative and we can afford,” says David Balsar, co-founder of Electric Sheep, based in Tel Aviv, Israel, which bills itself as “an online video-centric destination sites media company.”

“It’s eclectic, contemporary, up-to-date content,” he adds. “We like to see how we can assemble it in such a way that it will be fun for the user as well.”

Balsar curates the content along with Electric Sheep co-founder Daniel Matiuk, licensing hundreds of videos from sources such as WatchMojo.com and Crane.TV.

“The sources can be individuals, content aggregators,” Balsar says.

Balsar says #Unblocker is getting 10,000 unique daily hits and growing rapidly. They might add subscription content at some point, but right now they plan to operate on an advertising-based business model, and they’re looking to expand their client base.

“We are negotiating and discussing with potential partners, either media agencies, ad networks [or] brands,” Balsar says.