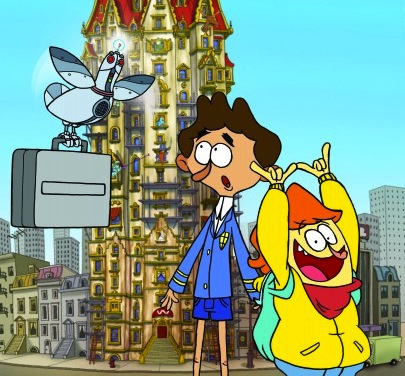 At its upfront presentation Thursday, Nickelodeon announced animated series Welcome to the Wayne will debut exclusively on the Nick App. The broadcaster is also launching its Nick Jr. App this spring.

Nickelodeon’s Nick App is getting a younger sibling, the Nick Jr. App, which will serve as a branded platform for preschoolers and live-stream network shows, as well as offer educational activities and short-form videos.

The app was announced Thursday at Nickelodeon’s 2014-15 upfronts in New York, and will be joined by more than 100 hours of new preschool content this season. The ad-supported iPad app will be largely character-based and have Nick heavy hitters like Dora the Explorer, Molly and Gil from Bubble Guppies and Twist from The Fresh Beat Band front and center. It will respond to users through tap interactions.

As part of its content pipeline revealed Thursday, the network also announced one new exclusive digital series called Welcome to the Wayne (pictured), which is heading to the Nick App. The six-episode series, created and written by Billy Lopez (The Wonder Pets!), follows the adventures of two 10-year-old boys who go exploring around their crazy apartment building, the Wayne.

As part of its evolving digital strategy, the Viacom-owned broadcaster recently announced it will debut an interactive channel called My Nick Jr., a multi-screen platform that lets parents customize a playlist for their kids on television, desktops and tablets. Parents can create a channel by age, gender and educational themes, and can also choose the duration of each viewing, pause content on one device and resume playing it on another. My Nick Jr. is rolling out this spring in the U.S.

With files from Jeremy Dickson and Melita Kuburas