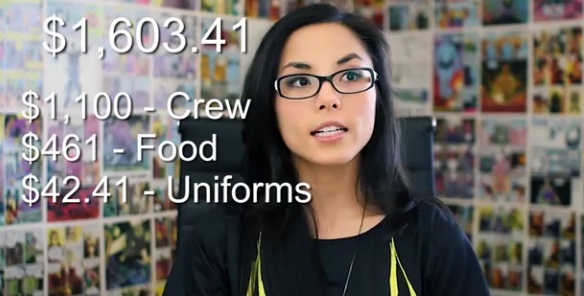 Screening room: The actress, writer and director who is making 12 short films this year has posted a video on her YouTube channel detailing how much it costs to make one.

Anna Akana, an actress, writer, and director who is making 12 short films this year, is speaking up about the financial commitment it takes to make one.

In this video posted Monday on her YouTube channel, Akana breaks down the budgets for some of her shorts that have recently debuted or are currently in production. These include Hallucination ($1,479.74), Afflicted ($3,519), Emergency Call (approx. $1,603.41) and Pregnapocalypse (about $4,000, Akana approximates, as it will require four pregnancy suits). Check out the video above for a detailed breakdown of the funds for such necessities as cast and crew, food, props, and makeup.

“Be prepared that if you invest your own money in a short film, you are essentially losing it,” Akana warns.

However, she has been able to attract sponsors to recoup some of the costs.

“The last two months I’ve had two sponsors, one a month. And I’m very lucky in that one sponsor a month pays for that short film,” she says.

Akana is known for her work on Riley Rewind, a web series directed by Ray William Johnson, with whom she is collaborating on some of her films.