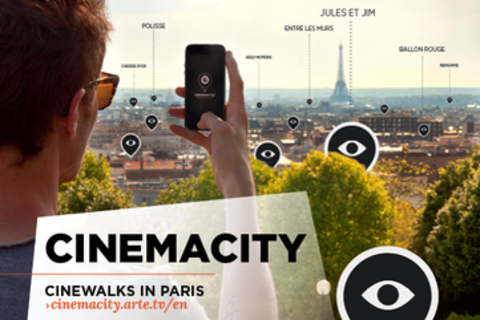 SXSW blog: Interactive is not a genre, it’s an ingredient

Creator of the Cinemacity app sums up the theme of content-creation at the festival, while Defy Media's Smosh promotes two new shows at the inaugural SXSW Gaming Awards.

This first weekend at SXSW the crowds were intense, and there was a lot to check out. But as your roving reporter here in Texas, I’m committed to wearing out shoe-leather in order to find entertaining and interesting new tidbits.

As a filmmaker, I’m fascinated by an emerging theme this year among panelists and presenters. It appears that producers are acting like entrepreneurs, and entrepreneurs are getting into content production. I was able to attend two great panels on either side of that conversation this weekend. One was Are we All Producers Now?, presented by Trigger Street Productions’ Dana Brunetti who was questioned by former Facebook exec Randi Zuckerberg, and the other was New Narratives: Building an Interactive Storyworld.

New Narratives was hosted by Ted Hope, a big name in independent film who lives in San Francisco and regularly writes about the connection between producing and entrepreneurship at Hopeforfilm.com. This panel discussed second-screen technologies and new projects built from hackathons, but my favorite quote from that panel actually came from the audience.

Michel Reilhac, formerly of Arte, summed it all up when he said: “Often interactive is considered a genre, but it’s not, it’s an ingredient.” Reilhac is a producer and entrepreneur himself, here at SXSW to show his app, Cinemacity. The app (pictured on top), which launched earlier this year in Paris, allows you to explore a city, and based on where you are, watch scenes that are filmed in that place. Imagine a walking tour that takes you through classic cinema in the French Quarter, or film noir in San Francisco. Quite a few film commissions were interested in the app during Reilhac’s own panel, Discover your city through the movies shot in it, inquiring about how they might use it to showcase their cities and states. 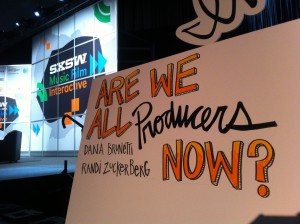 Brunetti, producer of House of Cards and The Social Network ,was interviewed by Zuckerberg in Are We All Producers Now? Brunetti described the processes of both producing and entrepreneurship this way: “All of these things come from problems that I have that I’m finding solutions to.” Having spent time in both Hollywood and Silicon Valley, Brunetti definitely has a track record in building businesses like Trigger Street Labs to match film industry talent with employers. His newest venture in development is a service that acts like a Snapchat for secure document transfers, a solution he found he sorely needs when dealing with confidential screenplays.

This weekend also played host to the SXSW Gaming Expo. I made my way over to the Long Center to attend the First Annual SXSW Gaming Awards. These were hosted by iJustine and Smosh, who are YouTube celebrities with millions of fans. It was clear that a huge group of the audience was there to see these YouTube stars, whose shows are repped by Defy Media. Smosh promoted their new YouTube series 16 Bit High, which is about video game characters attending high school, and Honest Game Trailers, a show that pokes fun at video game promos. 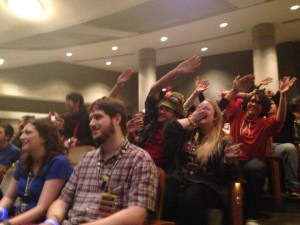 Aside from showcasing some great games like Tearaway, Gone Home and The Last of Us, the star of the Gaming Expo was the opening act: an audience-controlled videogame by Audience Entertainment. It immediately got the crowd excited, as people worked together to navigate a Pac-man style maze adventure by waving their arms and yelling, which triggered the Kinect-based motion sensor system that controlled the game, projected onto the screen onstage. It really brought the energy up in the auditorium. I expect we’ll be seeing a lot more of these interactive audience features in movie theaters and other spaces as brands and productions seek more tangible ways to engage their audience in physical spaces.

Read Caitlin’s first post: “SXSW: Who will take the fest by storm this year?”