Partying and parenthood have playdate in Parked

When the sizzle reel for Parked first went viral on YouTube in April 2013, users flagged it for objectionable content, but nobody could tell co-creator Siobhan McCarthy what the problem was.

Was it the drinking? The nudity? The drug use? The profanity? Or was it simply the fact that all of this was being done in proximity to small children? It certainly could’ve been that scene where Davinder (Sean Amsing) and his wife Christine (Sonja Bennett) have their morning sex interrupted by their toddler son.

The show, centred around a trio of slothful stay-at-home dads and their childless burnout buddy, had no such problems when it made its debut last week as a full-fledged internet series on the more lenient Dailymotion.

On Dailymotion Canada, “they’ve skinned [i.e. wallpapered] their whole comedy channel with [ads for] our show,” enthuses McCarthy, who also co-stars in Parked as Jenn, the school teacher wife of floundering writer Tim (Kirby Morrow). “They have social [media] people who are pushing it. It’s been such a success so far that they’ve asked us for French subtitles for France.”

Parked – which will debut new episodes each week on Dailymotion and YouTube through July – was shot over the course of three weekends in Vancouver last November and December, but it was first conceived four years ago by McCarthy and co-creator Adam O. Thomas, after both had (separately) become first-time parents. McCarthy’s first post-partum gig was a role as a clown in a March 2011 episode of R.L. Stine’s The Haunting Hour titled “Afraid of Clowns,” and she asked its director Peter DeLuise (pictured, flanked by Thomas and McCarthy) son of the late comic actor Dom DeLuise, to take a look at the script.

“I thought ‘This is fun, this is down and dirty, and I’m a dad, and this really appeals to me,'” recalls the Vancouver-based DeLuise, best known for his work as an actor on 21 Jump Street and a writer/director/producer on the show Stargate SG-1.

McCarthy scrounged up money for a sizzle reel, titled Dads (it was retitled when a sitcom with the same name debuted on Fox last fall), which was shot in April 2012. She took it to TV outlets to pitch it as a series, but nobody would commit. Instead of quitting, McCarthy decided they’d go direct to digital and raise the money themselves.

“Siobhan is quite tireless in that regard,” marvels DeLuise, who directed both the sizzle reel and the subsequent series. “She just kept plugging away.”

The bulk of the show’s not-quite $220,000 (CDN) budget for the season (which will have a total run time of approximately 1.5 hours) came from Creative BC’s (formerly BC Film + Media) Interactive Fund and the Independent Production Fund.

A crowdfunding campaign via IndiGoGo to raise an additional $20,000 only attracted $8,717, but “we had quite a few quiet funders come up to us and say, ‘I don’t want anything to do with putting an email address in a computer, but here’s $5,000’ or ‘Here’s $3,000,'” McCarthy recalls, “so we were able to meet our goal, but it doesn’t look like we met our goal online.”

Given the near-constant, heavy beer-drinking by Parked‘s dads, McCarthy figured enlisting a brewery as a brand sponsor would be easy. She figured wrong.

“I approached more micro-breweries and breweries than I even knew existed,” McCarthy says. “[But] they kept saying, ‘Potentially season two.’ I find that Canadians are a little bit risk averse. They always want to try it out and see if succeeds or fails, but definitely not fail on their dollar.” 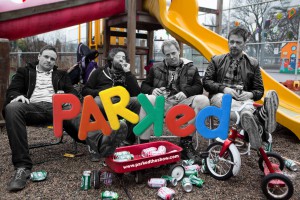 Parked producers were able to save a few dollars of their own by forgoing the services of a casting director for the most part, instead filling out the cast with friends and acquaintances from Vancouver’s vibrant acting scene. And while it was a union shoot employing a cast of 39 and a crew of 50, it was done under the Union of British Columbia Performers’ (UBCP) Ultra-Low Budget Agreement and several key talent – namely McCarthy, Thomas, producer/writer Tracey Mack and co-star David Lewis – deferred their fees.

Parked has one significant non-union cameo appearance – Freddie Wong (pictured at top, with McCarthy and Morrow), creator of hit internet show Video Game High School – whom McCarthy met at the Toronto International Film Festival last September. In an episode debuting April 25, he plays the head of the IT department at Jenn’s school, who’s brought into fix the laptop Tim ruined during a porn-watching mishap in the sizzle reel.

“We had a couple of laughs, then I pitched him via Twitter,” McCarthy explains. “I said, ‘We have a storyline. I would like to create this character. Would you be interested?’ And he said, ‘Why the hell not?’ So we flew him up.”

Parked debuted on YouTube this week – replete with pot smoking, public drinking and profanity – and it has yet to be flagged, although the premiere episode still has under 100 views there, whereas on Dailymotion it has over 13,000.

Obviously, nobody is getting rich off the ad revenue share at this point, but McCarthy is hopeful that a pair of Canadian carriers who have been monitoring the show, Bell Media and Super Channel, could take Parked into the more lucrative traditional TV space.

In the meantime, she’s watching the progress of her creative baby like a helicopter parent.

“I always joke that it’s the other child I will never have,” McCarthy says.