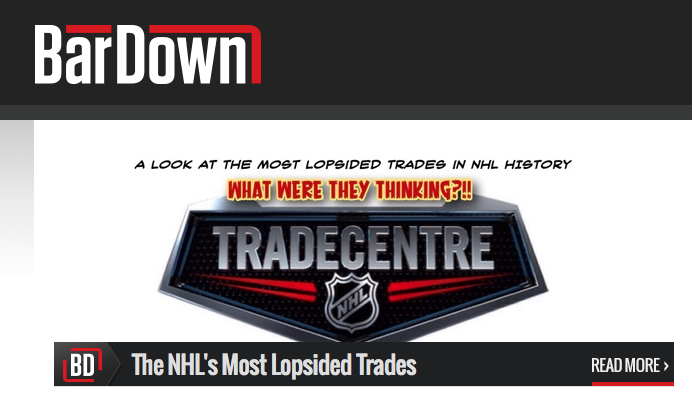 As NHL player Paul “BizNasty” Bissonnette explains in an introductory video, the term “bar down” refers to a hockey goal scored on the top portion of the net, behind the crossbar, where the goaltender usually leaves their water bottle. Bissonnette will be featured in a regular series called BizNasty Hockey Lingo.

Nathalie Cook, VP integrated marketing and partnerships, TSN, says that the site was born out of a combination of the need for a new outlet for personality-driven content that didn’t fit TSN’s hard news approach and advertisers increasingly approaching the network with new content proposals and non-traditional advertising ideas.

“We had a more journalistic approach to TSN.ca as a place where people go for sports news, but what we saw between our Twitter, Facebook and social media was the level of engagement we had on some of the more viral types of sports content, the melding of sports and pop culture. TSN.ca wasn’t always the best place for that content to reside.”

Coca-Cola has signed on as sponsor, activating with display ads and video pre-roll for Sprite and a home for new instalments of Moment Zero, the sponsored video series for Coke Zero featuring Steve Stamkos and TSN personality James Duthie that has previously been hosted on TSN’s YouTube page and as a 30-second TV spot.

Cook says BarDown was launched with Coke Zero and Sprite as sole sponsors because it met the needs of the existing advertising partnership between TSN and Coca-Cola, but she adds that it’s not an exclusive deal and there will be opportunities for other brands to get involved with the site. “The goal is not for this to be something that is completely owned by these brands for the long term, but it was certainly a goal to launch together,” she says. “We will welcome all partners.”

She says that the audience will likely align with TSN’s social media following, which skews younger than TSN’s overall audience, but that TSN will wait and see what kind of audience is actually attracted to the content. Despite early comparisons to ESPN’s Grantland, Cook says the tone of BarDown will more closely resemble Gawker or BuzzFeed than Bill Simmon’s longform sports and pop culture journalism hub.