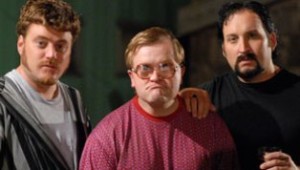 eOne's comedy series will launch March 31 in all markets that Netflix operates in with all new episodes debuting this fall.

Netflix has struck an exclusive distribution deal with Entertainment One (eOne) for their hit Canadian comedy, Trailer Park Boys, which has been off the air for nearly five years.

This fall, season eight will debut on the SVOD streaming service with 10 new episodes in all markets that Netflix operates in. The launch date of season nine is TBD. It is Netflix’s first exclusive order of original Canadian content.

As part of the deal, seasons one through seven will be also added to Netflix on March 31, available for the first time in the UK, Ireland, Netherlands, the Nordics, and Latin America, according to a release.

Last summer, John Paul Tremblay, Robb Wells and Mike Smith (the actors who play Julian, Ricky and Bubbles) bought the rights to the Trailer Park Boys IP and said they would launch on the digital comedy network Swearnet. Once season eight launches, the show will come off Swearnet, a spokesperson says.

It’s been a while since the cameras have followed the boys and there have been some changes: Ricky recently harvested an enormous weed crop which he has successfully hidden in the walls of his trailer, Julian has opened a bar and gym in his trailer and Bubbles is in the process of opening what he calls a ‘Shed and Breakfast’ business, according to a statement.