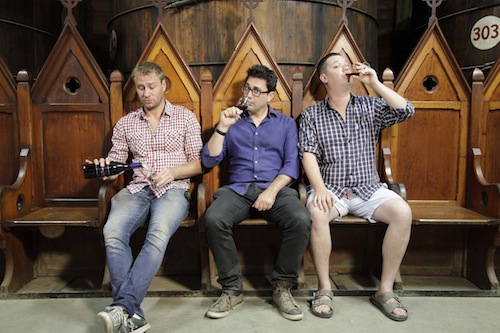 Australia falls drunk in love with show about wine wankers

A sponsored web show set in the wine regions of New South Wales has struck a deal with a TV network and an airline, and is in more licensing talks. Not bad, considering it cost less than one hour of traditional TV to make.

It’s only natural that an idea for a show set in Australia’s wine regions was formed by friends having drinks together — many, long, wine-fuelled lunches, to be exact.

Plonk, a web series that debuted on YouTube last month, was the brainchild of filmmakers Joshua Tyler and Chris Taylor, who also star in the show. About 18 months ago, Glen Condie and Nathan Earl, producer and director of Plonk, respectively, got serious about making the series that has just been picked up by Australia broadcaster Network 10 as well as Qantas airline’s in-flight entertainment system.

Plonk follows a small television crew as they travel through New South Wales (NSW), trying to produce a show about wine-making. Within two weeks the comedy (five episodes X 12-15 min.), which is partially funded by the state government’s tourism body, Destination NSW, was seen on YouTube by about 200,000 people.

Now, the creators are in the process of delivering three half-hour episodes for TV as well as a one-hour special. The edits will all come from the existing footage they got during the shoot, which occurred in December and early January, explains Condie, who developed the series with Earl through Wonder Communications, a creative agency that specializes in experiential marketing and branded content. 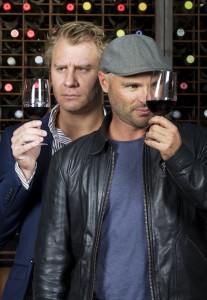 As a team, Condie and Earl (pictured F-B) have previously worked with Qantas on a show called The Great Crusade, which received an international Emmy nomination for digital fiction in 2012. The relationship helped them get a licensing deal for Plonk, which will run episodes on domestic flights for five months and internationally as VOD for six months.

“We are also in talks for a bigger, better season two. Some initial thinking is that some of the series may be set in the Napa Valley,” Condie tells StreamDaily. “It would be great to get over to the U.S., which means we will be approaching funding partners in the coming months.”

While Wonder Communications had some initial talks with TV networks prior to shooting, it wasn’t until execs at the network actually watched the show and liked it that they agreed to a licensing contract. “Plonk was on their radar and they had already bought into the idea. Like anything though, the proof is in the pudding,” Condie says. 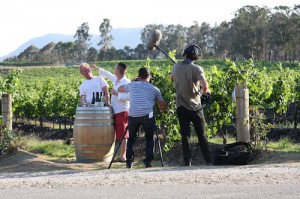 Relative to South or Western Australia, NSW is not as well known for its wine-making, despite most of the vineyards being a few hours’ drive from the capital, Sydney. Destination NSW believed that if the show was created it would showcase some of the great wine regions there. And it does — many of the scenes show the sprawling, sunny vineyards of places like Murrumbateman, Newcastle, and Canberra, and feature real wineries and winemakers in those areas.

“From a script-writing perspective we never at any point felt as though we were selling something,” Condie says about the sponsorship.

It was a smart bet on the part of the tourism body. Aside from the TV and in-flight deals, Wonder Communications is in talks with one of the largest media companies in the country, News Corp., to licence the show and they have received interest from international TV stations, Condie says. They estimate that the show’s viewership will grow to about five million — “Not bad when you consider Australia’s entire population is 20 million, and that we made the entire series for less than the cost of one traditional hour of TV,” Condie says.

The show doesn’t target a specific demo because, well, who doesn’t like comedy and drinking?