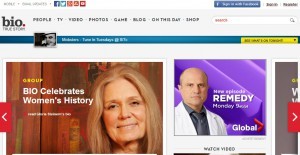 The media company will manage editorial, sales and technology for Bio.com and LifetimeMoms.com, and add video pre-roll to its inventory for the first time.

Say Media has entered a partnership with A+E Networks that will see the media company manage operations for Bio.com and LifetimeMoms.com. The sites will migrate to Say Media’s proprietary publishing platform Tempest and Say Media will assume responsibility for editorial, sales, technology, publicity and marketing for both properties.

A+E Networks will continue to produce and provide video to Bio.com. Last December, the broadcaster announced it would re-brand the Bio channel as FYI.

Laura Grimm, editor in chief, Bio.com, and Melissa Kagan, editor in chief, LifetimeMoms.com, will both remain in their positions and report to Joyce Bautista Ferrari, executive editorial director, Say Media. Both sites target women with a focus on moms. Bio.com reaches 12 million unique viewers globally, according to the most recent comScore numbers, while LifetimeMoms.com reaches about 2 million globally.

Paul Cassar, VP international, Say Media Canada, says the company, which also owns and operates publications like xoJane, ReadWrite and Fashionista, will create a more streamlined experience for users and publishers by updating the site design and CMS. The partnership will also give Say Media video pre-roll inventory to sell for the first time, he says.

“It gives us a property to anchor video campaigns around,” he says. “A+E and Lifetime have an abundance of that inventory so we’ll be able to integrate that with what we currently go to market with as part of a package.”