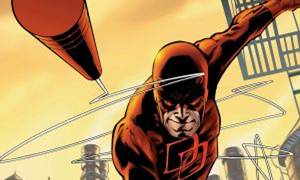 Daredevil heroes head for Hell’s Kitchen, where they belong

The Netflix, Marvel and Disney series will be filmed in New York, bringing big business to the state. But the move also makes sense for the producers, both creatively and financially.

If anyone believes that Hollywood hasn’t been doing enough with comic books, their doubts should be stamped out with brutal finality by Wednesday’s announcement that Walt Disney Studios and Marvel will be moving forward with plans for an epic live-action super hero project to air exclusively on Netflix, which could amount to 60 hours of programming.

According to a joint statement released by Disney, Marvel, Netflix and N.Y. Gov. Andrew Cuomo, production will begin on Daredevil in New York City this summer, with a binge-viewing debut set for some time in 2015.

It will be the first in a series of four 13-episode Netflix shows from Disney/Marvel over the next several years, to be followed by Jessica Jones, Iron Fist, Luke Cage and, finally, a four-to-eight episode mini-series in which the four characters team up as The Defenders, a la The Avengers.

The deal was first announced last November, but Wednesday’s announcement confirms that the project focusing on Marvel’s “flawed heroes of Hell’s Kitchen” will film in the city where the characters live.

In a statement, Cuomo boasted that the productions will bring the New York State “hundreds of jobs and millions of dollars in new business.” That’s great news for New York, but yet another blow for traditional TV production hub California, which over the last decade has been increasingly losing shows to states offering generous tax credits.

New York has a 30% film and TV tax credit with $420 million in annual funding, whereas California has a highly restrictive 20 to 25% credit budgeted at only $100 million a year. As a project made for a pay-TV service, The Defenders shows do not qualify for the California credit. A bill calling for improvements in California’s incentive was recently introduced into the state assembly, but many fear it could be a case of too little, too late.

But even Hollywood boosters admit New York is the right place for the project.

“This is one of those rare examples where it makes creative sense,” says FilmL.A. research analyst Adrian McDonald, who’s authored several studies on runaway production, including a comprehensive examination of production patterns in 2013 set to be released on March 6.

“As a fan of the comics, I personally think it will make for a better viewing experience if I see these heroes from Hell’s Kitchen in Hell’s Kitchen.”