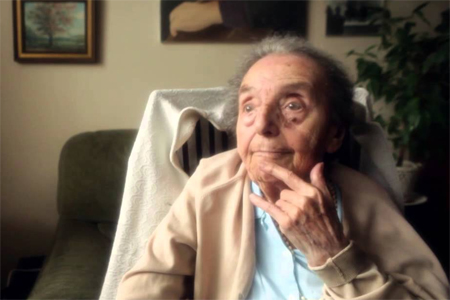 A day after the film's centenarian subject passed away, producers of The Lady in Number 6: Music Saved My Life announced their short has been picked up by the streaming service.

Netflix has bagged exclusive rights for its second Oscar-nominated documentary, acquiring The Lady in Number 6: Music Saved My Life, a day after the film’s centenarian subject passed away.

The 38-minute documentary looks at the life of Alice Herz-Sommer (pictured above), who, until her passing on Sunday, was the world’s oldest-known Holocaust survivor. She died at the age of 110.

The doc, from Academy Award-winning director Malcolm Clarke (Soldiers in Hiding; You Don’t Have to Die) and producer Nick Reed, will premiere exclusively on the digital platform on April 1 in the U.S. and Canada.

The film is currently the bookmakers’ favorite the win the Oscar for Best Documentary Short next month. Netflix previously acquired exclusive rights for Jehane Noujaim’s doc The Square, which is Oscar-nominated in the Best Documentary Feature category.

The deadline for Oscar voting is today, Feb. 25. This year’s awards show will be important to both Netflix and Amazon, which last week picked up The Broken Circle Breakdown, a film from Belgium that’s nominated in the best foreign language category.

“Telling Alice’s story was a life-changing experience for everyone involved with the film,” said Reed in a statement. “We are so glad to partner with Netflix so that their viewers will be able to enjoy Alice’s infectious love of life and bright spirit.”