The technology company's application with the United States Patent and Trademark Office for "Milk Music" suggests it may be preparing to launch a streaming service that could broadcast music and video.

Samsung Electronics has filed three trademark applications all relating to a brand called “Milk Music.” Documents submitted to the United States Patent and Trademark Office (USPTO) suggest this would be a streaming entertainment service, capable of broadcasting music and video, and providing an online community access to a database of digital content. 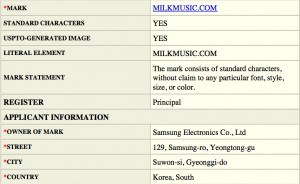 Three trademark applications were submitted by the South Korean tech giant on Feb. 14, and they were published by USPTO Tuesday. The filings are for “Samsung Milk Music,” “Milk Music,” and “Milkmusic.com.”

All three applications are for the same international class of trademarks and fall under the categories of education and entertainment (Class 41), telecommunications (Class 38), and electrical and scientific apparatus (Class 09).

While “music” is in the name suggesting this could be a radio service, the description under the telecommunications trademark class (38) again mentions video:

It’s not clear at this point what Samsung plans to do with the titles (the company could not be reached for comment by press time).

Its latest phone, the Samsung Galaxy S5, is expected to launch next week at Mobile World Congress. And a new marketing campaign is boldly claiming it’s bigger and better than Apple — so software that would rival iTunes Radio on the iPhone S5 would be a strategic competitive play. Some tech blogs have pointed out that, as a user of Android, developing its own streaming software might put it in direct competition with Google Play and Google Music, making a “frenemy” out of Google.

Last year Samsung promised investors it would focus innovation on software, rather than hardware — which has traditionally  been its strength — to respond to a changing information technology landscape.

But if the company has higher ambitions, they wouldn’t be the first tech Goliath to want in on the increasingly crowded web broadcasting. Intel planned to launch a next-gen video platform last year, but its efforts stalled and have since been picked up by telecommunications giant Verizon, which bought Intel Media last January and officially takes over next week.