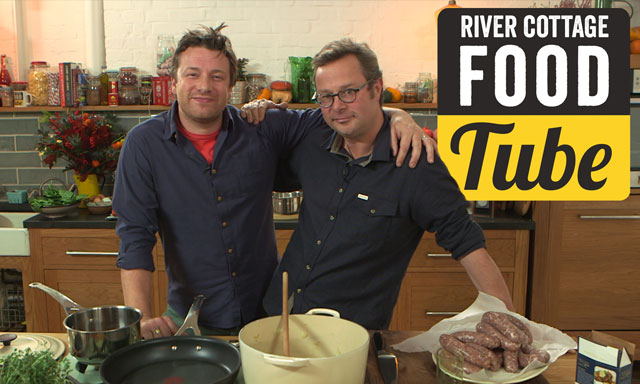 Produced by London-based KEO digital, programming on the new channel is the latest addition to the chef's Food Tube network, which has more than 600,000 subscribers.

People obsessed with both the food they consume and its impact on the environment have a new online video destination, River Cottage Food Tube, a collaboration between River Cottage founder Hugh Fearnley-Whittingstall (pictured right) and Jamie Oliver (left) that launched on Saturday with a joint video (below) on how to make a hearty sausage and prune casserole.

The new channel joins Jamie Oliver’s Food Tube network, which has 1.8 million monthly views and more than 600,000 subscribers, according to Google.

“Hugh’s a mate as well as a fellow campaigner and ever since he came on our live show last year, I have been encouraging him to have a go himself,” said Oliver (aka “The Naked Chef”) in a statement. “I can’t wait to see what new shows he’ll be bringing to Food Tube.”

Fearnley-Whittingstall and Oliver will be joined by other River Cottage personalities such as head chef Gill Meller, expert forager John Wright as well as curing and smoking master Steven Lamb, as they “scour land and sea in search of alternative culinary treats and a sustainable lifestyle,” according to a press release.

Produced by KEO digital, a division of KEO films, the programming will originate from a trio of locations in England – the original River Cottage (a 65-acre working farm and cookery school near Dorset), the River Cottage Canteen in Trinity Square, Axminster, and a London studio.  It will run 52 weeks a year and be hosted on a dedicated YouTube Channel and RiverCottage.com.

Fearnley-Whittingstall already has proven popularity in the digital space. RiverCottage.com has 1.5 million registered users and attracts 20 million visitors, and the River Cottage brand reaches 5 million people each month via its many social media channels.

There’s no word on River Cottage-specific plans for product integration, but don’t be surprised if you see the occasional jar of Hellman’s mayonnaise, which has a sponsorship deal with Jamie Oliver’s Food Tube.