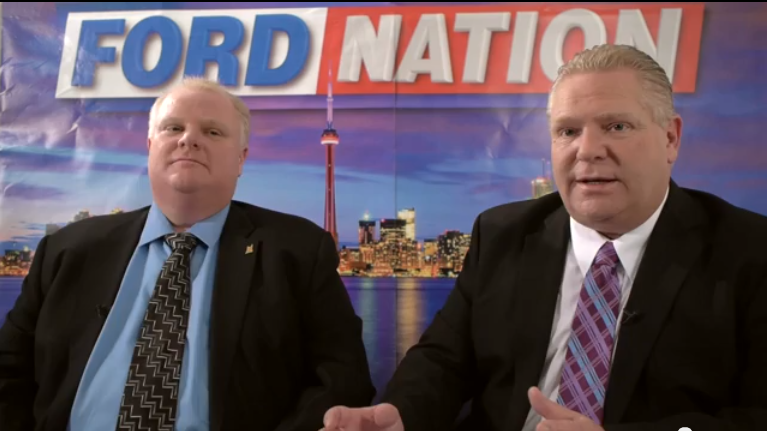 During her interview with Jon Stewart on The Daily Show last week, Toronto Star reporter Robyn Doolittle spoke about the difference between covering politics in Canada versus the U.S.

“In Canada, we are much less comfortable with getting into people’s personal lives,” said Doolittle, who is promoting her book about Toronto Mayor Rob Ford.

But besides Canadians’ reluctance to get all up in people’s private business there is another key difference between this country’s political coverage and that of the U.S.,  Italy or Russia, and that’s the lack of a culture of celebrity around their elected officials.

While Canada has its share of both responsible and corrupt politicians, they are — for better or worse — almost always, well, dry. Plus, pesky Canadian journalists usually insist on covering politics with a critical eye, challenging members of office on the their record and policy.

Thanks to digital media, that may be about to change.

Embattled mayor Rob Ford is the closest thing to a celebrity politician in Canada. Whenever he’s at a football game, a diner or a street festival, a scene forms around his presence and either videos of, or selfies with, the mayor pop up on the web.

Now, in the early stages of his campaign for a second term as mayor, Ford is leveraging the very platform that has helped tarnish his reputation: YouTube.

Filmed in front of a crinkled poster of Toronto by a volunteer producer who chooses to be anonymous, the Ford Nation channel is the second-best thing to sitting down with someone and speaking to them directly, a Ford spokesperson tells StreamDaily.

The mayor co-hosts with his brother, city Coun. Doug Ford, as they take jabs at one another’s weight; argue for a little “gotta hit ’em” hockey violence; and take questions from viewers who live as far as Bangkok.

The mayor’s communications director Amin Massoudi says the channel is not related to his campaign, but rather an extension of the Ford brothers’ cancelled radio and TV shows. The mayor is tired of having his words “twisted” and framed to present a certain position in traditional media, Massoudi says, so he’s reaching out to the people directly.

Others, including Doolittle, have pointed out part of Ford’s political strategy all along has been to share his unfiltered thoughts and opinions, without an immediate opportunity for anyone to challenge him.

“I think talk radio contributed to [Ford’s popularity] because the Fords … will say things that just aren’t true,” Doolittle told Stewart, referring to his Newstalk 1010 radio show The City, which was cancelled last year in the midst of the crack scandal. “There’s not that sort of pause of fact-checking. And with talk radio those errors become true.”

The YouTube channel is yet another opportunity for Ford to speak directly to his audience and fans, but it’s also a source of entertainment for viewers as he continues to build his international celebrity.

Ford is not the only politician in Canada trying to use vlogging as a way to connect with people and modernize his personal brand. This week the Star published a story about documents that reveal the Conservative party plans to launch a video series centred around the Prime Minister’s wife, Laureen Harper “in order to put a more human face on the government and grab eyeballs in the digital age.”

Mrs. Harper could be a hit on YouTube: She’s an animal lover who has a lot of cats, and even adopted a pet chinchilla that made it onto the family Christmas card last year. That sounds much more vlog-worthy than the PM’s own 24/7 video series that’s a bit of a snooze fest as it recaps the government’s initiatives and shows clips of boardroom meetings.

Canadian politicians have a long way to go before achieving the kind of following on social media of U.S. President Barack Obama, which has more than half a million subscribers. And it may be a long while before another politician in Canada achieves the sort of Sarah Palin-esque notoriety, as Ford has. (Doolittle’s book Crazy Town: The Rob Ford Story is being made into a movie by Blue Ice Pictures.)

But they are starting to realize that in order to get past the traditional media filters, digital platforms offer the perfect soapbox where they can connect with viewers without having to answer journalists’ questions.