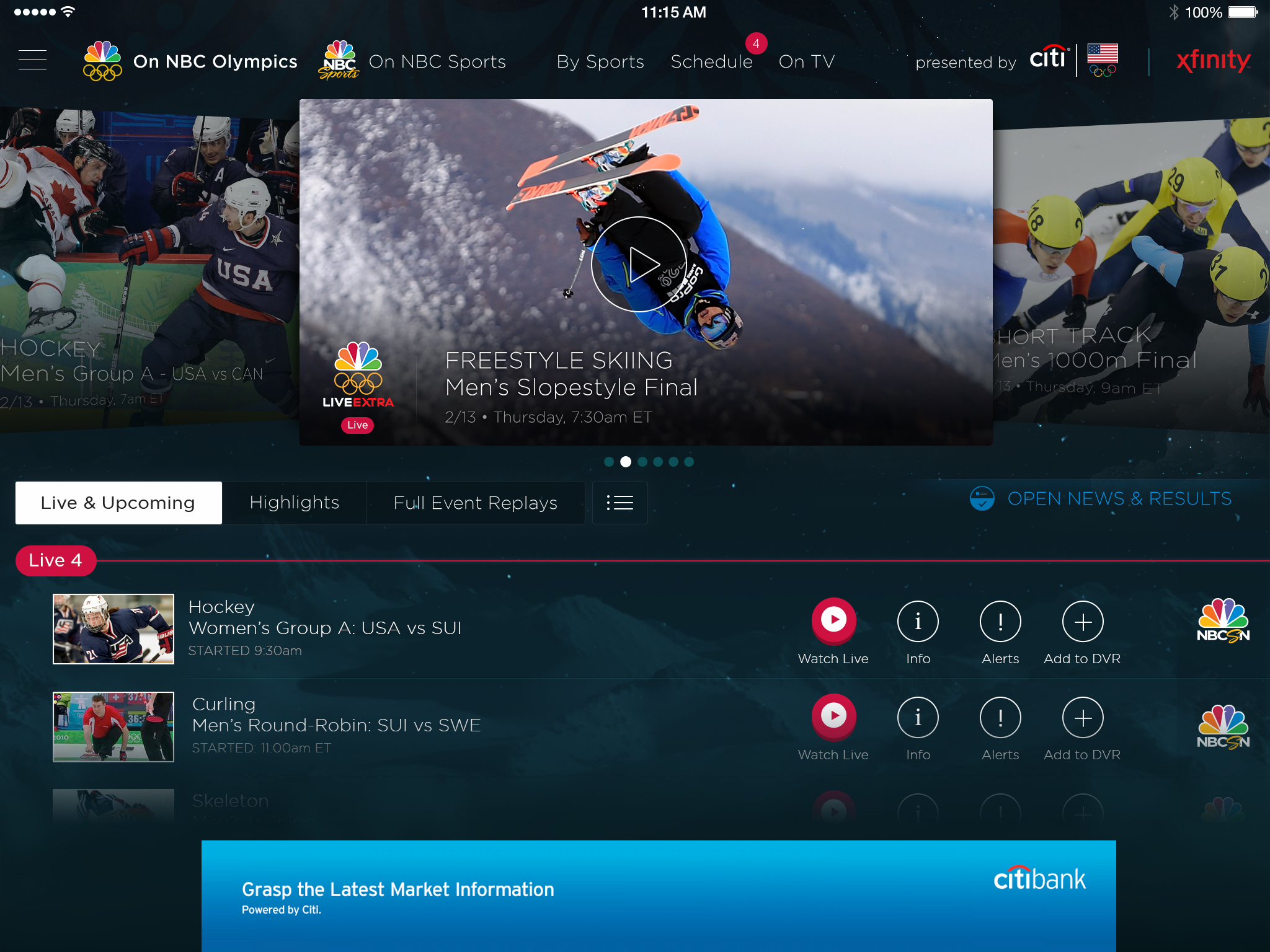 The network will live stream 1,000-plus hours of Olympic competition via NBCOlympics.com and NBC Sports Live Extra app, alongside digital exclusive shows the Gold Zone and Olympic Ice.

American sports fans grumbling about NBC’s time-delayed TV broadcast of most events at the XXII Olympic Winter Games currently underway in Sochi, Russia (where it’s nine hours ahead of Eastern Standard Time) should go online or pick up a mobile device. That’s because the network will be presenting more than 1,000 hours of live streaming coverage and up-to-the-minute information via its Olympics website, Yahoo, two apps and a plethora of social media platforms.

NBCOlympics.com is also carrying a live stream of all the competitions – upwards of 1,000 hours – as well as  TV listings, event results, medal standings, video highlights, replays and feature stories. By comparison, the site only streamed 400 hours of live competition during the 2010 Vancouver Games.

But true Olympics junkies will be grabbing their smart phones or their tablets to use the NBC Sports Live Extra app, which will carry live streams of every Winter Games competition from all 15 sports and the awarding of all 98 medal events. It will also live stream all the Olympic content airing on NBC and the four NBCU cable channels covering the Sochi Games — NBCSN, MSNBC, CNBC and USA Network – and feature full event replays, exclusive highlights, events schedules, TV listings and customizable event alerts.

NBCOlympics.com and the NBC Sports Live Extra Gold Zone app also carries digital-only shows Gold Zone and Olympic Ice. Hosted by Andrew Siciliano and Ryan Burr, Gold Zone will offer more than 100 hours of coverage of the most popular live action from the  Games. The channel streams 7 a.m. to 3 p.m. ET most days.

Olympic Ice is a 30-minute studio-based show hosted by Russ Thaler and 2002 Olympic gold medal-winning figure skater Sarah Hughes providing a comprehensive review of all the figure skating news and highlights. It will air at 5:30 p.m. EST on most days through Feb. 21.

NBC Sports Live Extra also offers users different ways to view the games, providing multiple concurrent streams for select sports, such as skiing, snowboarding and hockey. For example, instead of watching a single skiing feed that moves from event to event, a la traditional TV broadcast, a user can choose to watch a stream dedicated to a specific discipline, such as the long jump or half pipe.

With another app, NBC Olympics Highlights and Results, users can enjoy a second-screen, with trivia, polls, slideshows, videos and athlete bios all synced with what is airing on NBC.

NBC will also be presenting original video content on Facebook and Twitter, the latter of which premiered a feature on South Korean figure skating gold medalist Yuna Kim, narrated by Ryan Seacrest, and rolling out Winter Olympics-related material on virtually every other social media platform known to man (Instagram, Tumblr, Flickr, GetGlue, Google+, Poptip, etc.). Much of the video content is also carried on Yahoo as part of a digital alliance.

Cord-cutters beware – the vast majority of live stream content on NBCOlympics.com and NBC Sports Live Extra will only be available to verified cable, satellite or telco customers.