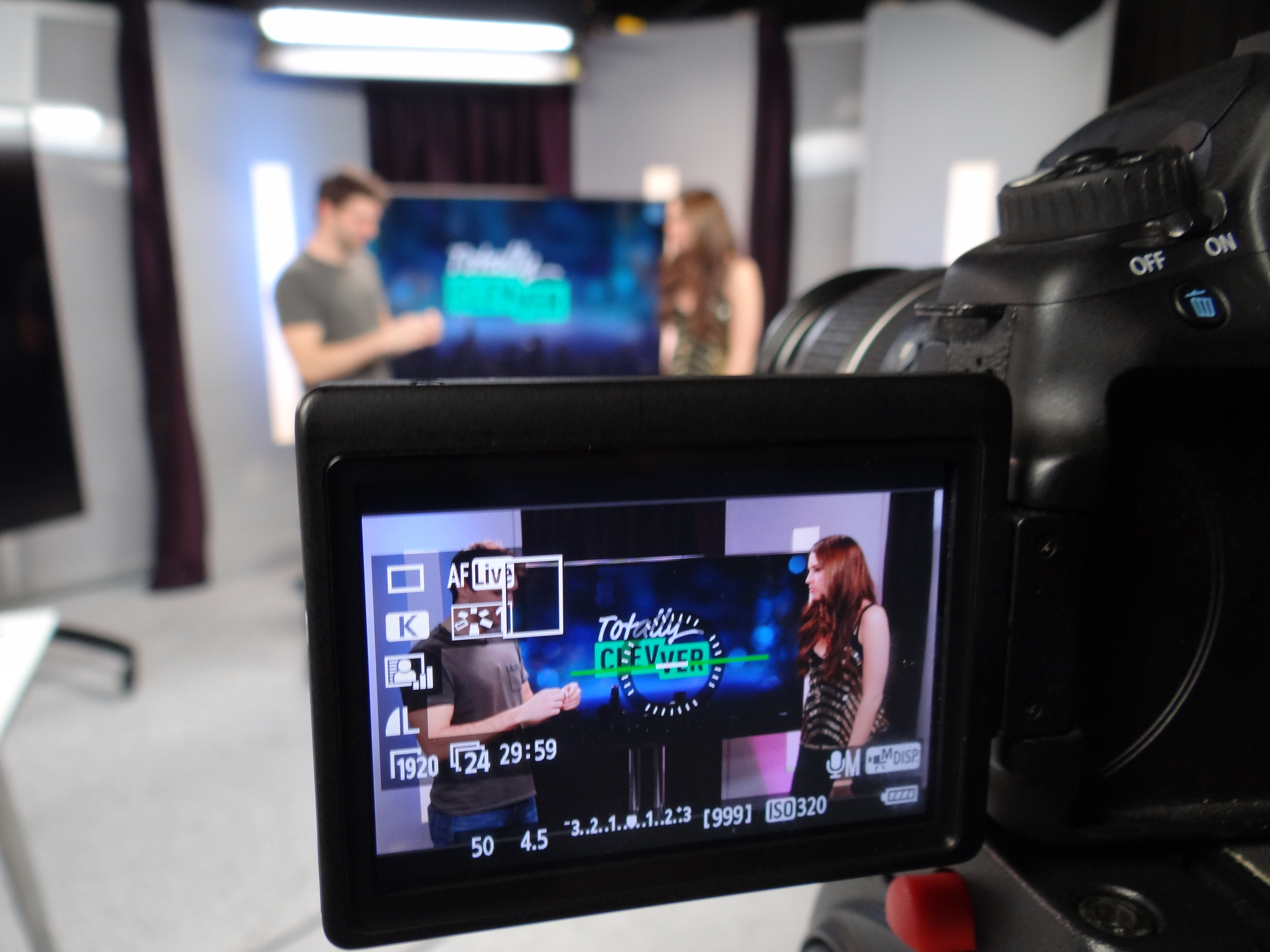 Since the merging of Alloy Digital and Break.com, Defy has embarked on an ambitious programming strategy that includes launching 30 shows this year.

It’s a mid-January afternoon on a dark sound stage at Defy Media’s Beverly Hills office, and the team behind the company’s new internet entertainment magazine show Totally Clevver is buzzing about their red carpet triumph the night before at the Critics’ Choice Movie Awards.

Although Clevver received its share of snubs (thanks for nothing, Matthew McConaughey), it got five minutes with Oprah Winfrey and co-host Traci Stumpf convinced Saving Mr. Banks star Emma Thompson to give a dramatic reading of the lyrics to Beyoncé’s Drunk in Love (sample line: “I get filthy when that liquor get into me”).

No, this is not your father’s entertainment television news. That’s the point. Kind of. 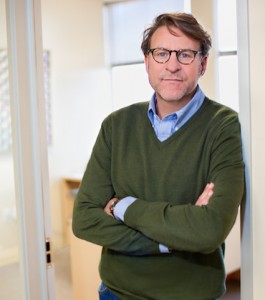 “Yes, our audience is probably more interested in what Justin Bieber’s latest tattoo says rather than what Meryl Streep happens to be up to this week,” admits Barry Blumberg (pictured, right), EVP of Defy Media. “But, that being said, I think there’s a real push to flow a little more into the mainstream with Clevver and not be pigeon-holed as a teeny-bopper brand.”

Likewise, Defy’s overall strategy is moving a little closer to the mainstream, not so much in terms of demographic targeting, but by implementing a programming strategy that more closely resembles network TV.

“We’re looking to put on more regularly scheduled programming that people want to tune into on a weekly basis, as opposed to just adding more content,” says Blumberg, who was president of Walt Disney Television animation from 1994 to 2006. For instance, “in the second quarter of this year, you’ll probably see a new show on the AweMe channel, which traditionally has had just two: Man at Arms and 3D Chalk Art.” Over the course of 2014, Defy plans to release a total of 30 new shows.

If any digital studio has the right to flirt with network TV ambitions, it’s Defy Media. When Break Media and Alloy Digital merged last fall to form Defy, it became one of the top players in the YouTube universe, with sketch comedy site Smosh (the #2 most subscribed YouTube channel), Clevver Media (the #1 digital entertainment news provider), Shut Up! Cartoons and a host of other recognized content brands, including Screen Junkies, The Gloss, and The Escapist. Today, Defy boasts 125 million unique monthly viewers across its owned and operated YouTube channels and 40 million social media followers, and it maintains an in-house marketing department to cross-promote the brand via its owned properties on the web, mobile, social media and emerging OTT platforms, as well as through traditional media outlets.

But while Defy is a behemoth in the online world, its productions are not exactly major Hollywood studio in scope. 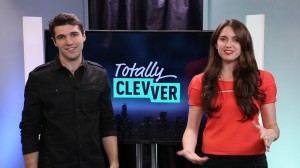 Totally Clevver looks slick, but it’s shot with a bare bones crew using DSLR cameras, and executive producer Tanya Bershadsky’s many duties have included helping cast Stumpf (pictured, left, with co-host Jarrett Sleeper), as well as scrounging up her wardrobe. Large portions of the content for Smosh – the company’s  most popular property, with more than 15 million subscribers and 2.9 billion video views as of January – is shot inside a two-car garage, with the rails for the automatic door clearly visible on the walls.

“They’re very smart about making sure it doesn’t feel like they’re huge sell-outs,” says Signore, who has created and directed many top Defy shows, including Man at Arms, Honest Trailers and The Screen Junkies Show, and serves as writer/director of Totally Clevver. Earlier in the Smosh duo’s career, “they shot in an apartment, and then they saw a house (in their native Sacramento)…that had a similar look and feel. Obviously, the crew has advanced and the budgets have [also] slightly, but the idea is they’re still delivering these fun homemade pieces.”

Still, nobody’s claiming the talent is making anything close to network or even basic cable bucks.

“The model for internet content doesn’t have the same sort of budgets,” says Lenora Hume, head of production for Defy’s Shut Up! Cartoons, a three-decade veteran of the business who previously worked with Blumberg at Disney.

It helps that many of their animation providers have no previous experience in the mainstream entertainment world. Pubertina was commissioned after they saw a short student film starring the title character creator Emily Brundige made at CalArts. Brian Wysol, creator of Icons of Teen and Munroe, was working a full-time non-animation day job when they spotted his work on the internet and invited him to do a series.

“Many of them were producing content for no money,” Hume says, “so they were actually quite thrilled to continue to do what they love doing and start to work with a viable economic model.  They didn’t really know how to do budgets and schedules, so I’d say, ‘Well, how much is it going to cost us to do this?’ and they’d say, ‘It’s free. I do it all myself.’ And it’s like, okay, even at minimum wage, how long does it take you to do this? We would do the math and they’d be like, ‘Oh, wow.'”

Defy has also attracted established pros like Cory Edwards, co-writer/co-director of the animated indie feature Hoodwinked, who made the series Krogzilla for Shut Up! But they’re not drawn in by the prospect of a big pay-day.

“[Cory] said he was really tired of getting executive notes telling him how to produce his content,” Hume says. “He just wanted to be able to do a series where it was really what he creatively wanted it to be.”

But Blumberg is quick to point out that their talent is only afforded “creative freedom within a frame.”

The border of that frame is defined largely by the demographic targets of the different brands. Smosh is aimed at males 12-to-24, while Clevver targets females in the same age bracket. For Shut Up! Cartoons, the sweet spot is 14-to 17 year-old boys. Defy also has a group of women’s properties – Crushable, The Gloss, Mommyish, etc. – catering to 18- to 34 year-old women.

Defy has a small in-house team in Los Angeles working full-time to develop programs for all its online brands, but the time it takes to get from concept to internet varies from channel to channel.

For instance, “on Smosh, the programming is very precious because we don’t produce very much of it, so it’s a very long process, similar to a development cycle that you would see in traditional media,” Blumberg explains. “With a channel like Clevver, we try a lot of different things, and if it doesn’t get a lot of views, we move on to the next thing.”

Most of the content for Shut Up! comes from the outsiders. Hume estimates they received approximately 300 pitches for this year’s lineup of eight to nine new shows. She and Carolyn Bates, one of the executives in charge of production for Shut Up!, attend film fests and animation conferences in search of new talent. They also take submissions from agents, but candidates are just as likely to come via cold calls and emails or referrals from other animators.

Prospective series creators are asked to submit one or two-page pitches, outlining the basic plot and characters and the type of stories they want to tell. If the idea seems like a good fit for Shut Up!, they’re then asked to pitch verbally in-person or via Skype.

Animation talent isn’t nearly as important as the ability to tell a story.

“The audience is a little forgiving with the quality of the animation,” Hume says.

The idea for Man at Arms, AweMe’s biggest hit, came when Signore stumbled across an online video of a blacksmith in Iceland making a sword.

“I thought, what if we had a guy do this and make the Zelda sword and these other pop culture items?” recalls Signore. “Everyone loved the idea and we really tried to fast-track it, but it really wasn’t possible until we found a blacksmith.”

Signore asked around town, and virtually everyone pointed him to the same man, British-born, Burbank, Calif.-based blacksmith Tony Swatton, who’s made weapons for a long list of blockbusters, including recent titles like The Hunger Games and Thor.

Prior to getting the call from AweMe, Swatton had been pitching his own reality series to traditional TV outlets, and Signore says they’d consider taking Man at Arms to broadcast or cable in the future.

To date, no Defy property has transitioned to traditional TV, but there have already been several successful spin-offs in other mediums, including four albums of music from Smosh, released exclusively as digital downloads, and a series of print magazines for Smosh and Clevver. There is also a One Direction: Clevver’s Ultimate Fan Guide coming out at Wal-Mart in February and a feature film, Higher Power, produced by Break pre-merger, scheduled to be released later this year.

“We’re looking to expand the brand where it makes sense,” Blumberg says, “but we’re not kidding ourselves, saying, ‘How do we take our digital properties and push them back into traditional development.'”

Then again, the very existence of Defy – which is already profitable, according to company reps –  is proof that the lines between mediums are quickly blurring.